Monkey Knife Fight are currently running a promo where you get a Instant Deposit Match Up To $100. Use our unique promo code to claim bonus.

What is so special about Monkey Knife Fight?

The MKF app offers almost all of the same features of apps like DraftKings and FanDuel, but there are notable differences. The creators behind Monkey Knife Fight were focused on putting a different spin on daily fantasy sports and provide a fun and unique experience. Most daily fantasy sports sites focus on building a team based on a certain salary, but that is not the way Monkey Knife Fight operates. Instead, MKF focuses on customers making bets on whether or not players will hit certain statistics throughout the game. Monkey Knife Fight also features several games that put two players against each other, and bettors can pick which player will have the best stats. Once you have tried the app, you will note that Monkey Knife Fight focuses more on prop bets than DFS gameplay, and the bets are more similar to what is offered at a typical sportsbook.

What Game Types Are Available in the MKF app?

Here are four of the most popular game types that are offered by Monkey Knife Fight, and a brief explanation of each of them.

How Do You Use The Monkey Knife Fight App?

The Monkey Knife Fight mobile app can be downloaded for free from the App Store or Google Play Store. The app is very fast, is free of any lingering bugs, and has a user-friendly interface. What makes the app different from the web browser version is that the app only lets you bet on fantasy points. The online platform allows you to bet on actual stats that athletes achieve in a given match. How MKF grads their fantasy points is broken down below and is quite similar to other traditional fantasy sports sites.

What are the Banking Options?

Monkey Knife Fight has some terrific banking options available that make the deposit and withdrawal processes extremely easy. Monkey Knife Fight supports payments from any major credit card, and the money will be added to your account immediately. There is a $10 minimum to deposit so keep that in mind. If you are looking to receive your winnings, there are several options for that as well. You are eligible to receive a check through the mail, or you can also receive an e-check. There is a $20 minimum when making a withdrawal.

How do you play Monkey Knife Fights?

Here is a video from last year that explains how to use the site: 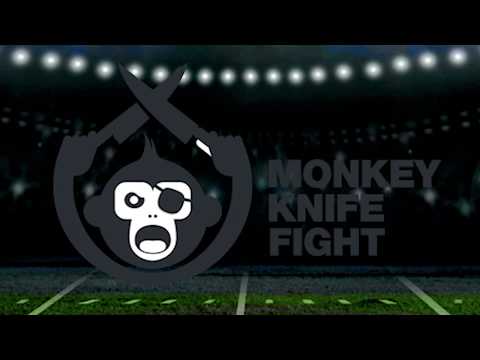 Where Is Monkey Knife Fight Legal To Use?

How Does Scoring Work For Monkey Knife Fight?

For those who have used other DFS sites, you’ll know that keeping track of scoring will be important. MKF is similar to other sites but has a few added methods of scoring and more opportunities to possibly lose points in certain sports.

How Old Do I Have To Be To Bet On Monkey Knife Fight?

In order to bet money on MKF contests, you have to be 18 years old.

What Types of Sports Are Offered At Monkey Knife Fight?

Monkey Knife Fight offers a wide range of sports to choose from including NBA, MLB, Golf, UFC, NHL, WNBA, NASCAR, Soccer, League of Legends, and Counter-Strike Global Offense. The last two are esports for those jocks new to the realm.

Are There Any Free Bets At MKF?

Yes. New users qualify to earn a free bet after they make their first deposit. This bet can then be used on any number of contests the site offers.

What Is The Maximum Deposit You Can Make At MKF?

Maximum deposits at MKF fall into three tiers. You can only deposit $1K per day, $5K per week, or $10,000 per month. If for some reason you’d like to deposit more you may call customer service and ask.

What Happens At MKF If I Bet On A Player That Doesn’t Play?

As soon as Monkey Knife Fight confirms that a certain player is in fact not playing, the amount bet on that player is refunded as soon as possible.

This deposit bonus might not be on par with some of the other top sites, but it’s better than nothing. Monkey Knife Fight is offering a 100% first deposit match up to $100 for new users, offered in MKF Dollars which are just as good as cash when playing games. New customers will also receive rewards points when signing up at the site, and these points can only be used in the rewards program. Signing up is easy: To get the match bonus use this code: USBR.

Daily Fantasy Sports was the preview to the legalized sports betting industry in the United States, and DFS sites continue to grow to this day. DraftKings and FanDuel are the two biggest DFS sites in the United States, but they are starting to face some real competition. Monkey Knife Fight is different from sites like FanDuel and DraftKings, but they still fall under the DFS category. Monkey Knife Fight is quickly emerging as a real challenger to these sites as well, and will only continue to grow. It’s clear that Monkey Knife Fight is out to change the DFS industry, bringing some fresh and innovative ideas. Their name alone suggests that this is a new site that is aimed at providing some fun and entertainment to their customers. Have a go and let us know what you think!